Esports Revenues to Reach $1B – Huge Opportunities for IT Vendors, Especially in Education

Esports has been a growing industry on the fringe of gaming culture since the late 1990s, but has exploded in popularity in recent years, attracting a massive audience to the world of competitive gaming. Major competitions such as the Intel Extreme Masters already attract more than a hundred thousand spectators, and millions of fans follow esports broadcasts on streaming channels like Twitch. This in turn is fuelling major opportunities for sponsorship, as well as earnings from prizes and advertising revenue streams for the best players, in particular those with the largest follower base on social channels.

According to the latest “Esports Opportunity for the Broadcast, Pro-AV and IT Industries” study by Futuresource Consulting, overall esports industry revenues are set to exceed $900 million this year, with an 18% 2019-2023 CAGR expected, driving revenues through the billion-dollar mark in 2020 and onto $1.8 billion by 2023. As key events attract viewing figures comparable to tier 1 sporting competitions, securing exclusivity of major esports events will become strategically important for both traditional sports broadcasters and the largest esports streaming platforms.

Esports has become a popular collegiate sport over recent years

Varsity esports is becoming increasingly popular and already forms part of college life, especially in North America, in the same way as football or hockey teams. Universities are building esports labs where their local teams can practice, equipped with high-end gaming PCs and broadcasting equipment. Some universities even have their own esports arena where hundreds of spectators can watch major live competitions on giant screens. High schools have also started forming esports teams, and some schools and colleges already offer esports as part of their curriculum, as well as bachelor and master degrees in esports combined with business or event management.

Where is the opportunity for major IT and AV suppliers?

Esports requires specific high-performance gaming PCs with advanced graphics and various gaming-related peripherals. Specifications are so important that players usually carry their own keyboard and mouse to tournaments. In addition, special gaming chairs are needed, as well as appropriate audio-visual (AV) equipment for streaming. This includes premium microphones and headsets, but also HD webcams. Large events usually require pro-video cameras, high-end sound systems and giant screens. There are huge opportunities in this growing market, especially on the education side, as esports is becoming more mainstream across schools and universities.

The global education esports PC installed base including universities, colleges and K-12 schools is expected to reach 117,000 units in 2020. While the higher education market is already quite mature in North America and South Korea, their K-12 market is expected to expand over the next few years. Other countries primarily across Western Europe and APAC – most importantly China – are also catching up rapidly. Competition among the main PC and AV brands is expected to intensify in esports, including specific solutions designed for schools and colleges. In addition, major vendors are looking to become sponsors of key tournaments and are aiming to get on the most popular gamers’ equipment lists. 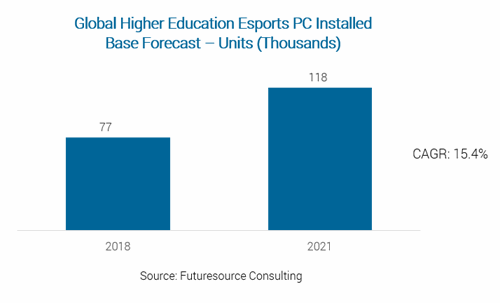 Megan Lovell is a Research Analyst at Futuresource Consulting and joined the company in 2018 after graduating from Loughborough university with a BSc in Economics.

Megan works within Education team and is responsible for researching and analysing the Global K-12 PC market. Megan writes quarterly reports tracking trends and developments within the mobile PC segment.

IT and AV Market Movements in Higher Education

There’s no doubt that the higher education sector has experienced a difficult period over the last 18 to 24 months. Profound and far-reaching changes have been applied in an effort to respond to the challenges of COVID-19 and enable students to continue to learn remotely.

BYOD on the Rise in Education: 1-in-4 Parents Bought a Device as a Result of being Instructed by the School

With school budgets under increasing pressure and hybrid learning becoming the educational norm, bring-your-own-device is a growing trend across a number of world markets.

Device and software purchases by K-12 schools across the USA continue to ramp up, with new vendor opportunities emerging throughout the education landscape.

Despite the majority of school districts in the USA having at least one form of display device installed, there are still many opportunities for technology vendors, according to a new EdTech report from Futuresource Consulting.