It’s show time. That’s what Apple is telling us in the run up to its 25th March event, heavily suggesting a new SVoD service launch. It’s a move that has been anticipated here at Futuresource Consulting and across the industry for a number of years now. We’ve been playing out the scenario in our recent Futuresource Video Insights reports and evaluating the market impact.

The Apple SVoD service will play a key role in the evolution of SVoD in 2019, particularly in the USA. This, combined with the high-profile Disney+ service, expected later in the year, will create something of a renaissance. And with more than 20 million Apple TV owners worldwide, who have demonstrated an insatiable appetite for content and a high capacity for entertainment spend, there’s a ready-made loyal audience just waiting to switch on. Factor in Apple’s new partnership with Samsung confirmed earlier this year, placing an exclusive iTunes content app on the South Korean manufacturer’s TVs and it has a solid base to build on. As nearly 80% of Netflix users say that watching the service on a TV is their preferred way to view, it’s a smart move. Watch out for future partnerships as the game plays out, with Pay-TV integration also a possibility.

Apple will be nothing without the necessary content makers. Even with its well-entrenched fan base, a strong and wide content offering will be needed from day one. Comparisons with Netflix’s content will be inevitable, and Apple will require a powerful portfolio to attract and retain subscribers. They’ll need to plan continued forays into exclusive or original content, but given Apple’s likely key subscriber demographic, these customers will be taking Apple as an additional service, rather than cannibalising their existing video subscriptions.

Looking to the wider landscape, we don’t expect the service to impact growth of the leading players, Netflix and Amazon Prime Video. Futuresource research shows there’s a continuing customer acceptance of multiple subscriptions. In the USA, there are nearly 80 million households with SVoD services, and on average each of these households takes two services. Our research suggests that this will trend towards three subscriptions in the coming years, although this will be marginally lower in Europe.  However, the sheer number of SVoD services available could see consumers become more comfortable with trial memberships and special offers, dipping in for short periods and then cancelling subscriptions as they become increasingly aware of the number of services they are taking. 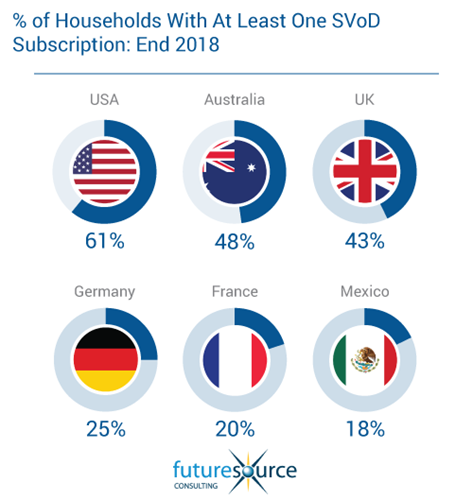 There’s also an opportunity here for Apple to become a content super aggregator, similar to how Amazon is carving out the landscape with Amazon Channels. Watch this space as the story builds, and for more SVoD-related information, expert Futuresource commentary, press quotes and a glimpse into the recent Video Insight reports from Futuresource, get in touch with Nicola Finn via nicola.finn@futuresource-hq.com.

David is a Principal Analyst – Media and Entertainment. David has over 20 years’ experience in a research and consultancy environment and is closely involved in researching, analysing and consulting on key content industry and consumer technology developments worldwide, with a particular focus on the evolution of digital business models in the TV, video and music industry. David works with a wide variety of high profile Futuresource clients across the content ecosystem including studios, broadcasters, technology companies, hardware vendors, service providers and industry associations. He also directs Futuresource’s long-running global consumer panel ‘Living with Digital’.

5G Rollout could Accelerate Subscription and Cloud Gaming to $13.6 Billion by 2026

Subscription and cloud gaming is gaining a firm foothold in the entertainment space, according to a new report from Futuresource Consulting.

The UK’s overall video entertainment sector is on track to deliver a strong performance in 2022, despite cost of living concerns and economic uncertainty.

Netflix is reportedly considering its first foray into live sports broadcast, with rumours emerging that the streaming giant has plans to acquire the US broadcast rights to the 2023 Formula One World Championship.

Futuresource at The DTG Summit 2022