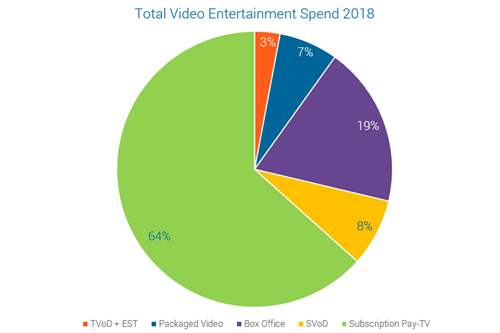 “Despite the closure of CanalPlay, SVoD has started to take off in France driven by Netflix’s fantastic performance. They have acquired the rights to key local language shows, which have been well received and have created a buzz around the service. From 5 million subscribers at the end of 2018, representing half the market, we are expecting their subscriber base to grow further in 2019,” said Tristan Veale, Market Analyst at Futuresource Consulting. Overall, SVoD revenues are expected to hit €827 million this year.

According to Futuresource’s Living with Digital consumer survey, viewing Netflix on a TV is now the dominant way to watch Netflix in France. “Over two thirds of Netflix users now say viewing on any TV is their most preferred way, with Smart TV’s in particular a key driver, a trend we are seeing in many other markets we survey,” added Veale.

Taking multiple SVoD subscriptions is still relatively uncommon in France, with less than 40% of SVoD households taking more than one service, with no significant challenger to Netflix since CanalPlay exited in mid-2018. In other more developed territories, multiple SVoD service uptake is on the rise. In the USA, SVoD households are trending towards an average of three per household.

The competitive landscape is expected to change, as super content aggregators such as Amazon step up their activity in the country and expected new SVoD entrants such as Disney+, Apple TV+, HBO MAX and others target the French market over the next couple of years. Whilst these new services and D2C offerings provide consumers more choice, Futuresource believes this trend will ultimately become frustrating for consumers, as programming choices become increasingly fragmented. Service providers that aggregate multiple services, provide pan-service search, navigation and provide a seamless user experience amongst the clutter of SVoD services will rise to the top.

Aggregation of other entertainment content could also be a differentiator moving forward. Companies like Apple with a broad range of TV/Video, music and games content could offer attractive “triple play” content bundles - Apple +, Apple Music and Apple Arcade. Gaming in particular is taking an increasing share of the consumer wallet, the French gaming software market will hit €3.5 billion in France this year, with strong growth anticipated over the next few years.

Throughout Tristan’s career he has provided thought leading research and insights on the consumption of Motion Pictures, Film and TV series. Now positioned as a leading analyst within the TV and Video content research team at Futuresource Consulting, Tristan informs content creators, distributors and CE manufacturers on the shifting and fragmenting media landscape, helping Futuresource’s clients stay up to date in terms of what consumers want to watch, where they want to watch it, and on which devices.

Entertainment as we understand it today, through the prisms of the internet and social media, is not quite the entertainment that previous generations would have recognized. After all, existing media like television, music, radio, and film have been revolutionized by an exponential boom of new technologies.

Headphones were the Most Purchased Tech Product during Lockdown

Headphones stood out as the top tech product purchased during lockdown, with nearly a third of respondents indicating that they spent more than they usually would pre-pandemic. That’s according to a new Audio Tech Lifestyles survey from Futuresource Consulting, carried out with consumers across the USA, UK, Germany, Japan and China.

UK consumer spend on TV and video entertainment is on track to break the £10 billion barrier for the first time this year. That’s according to a newly-released UK Video Insights report from Futuresource Consulting.

The Canadian entertainment video market is on the rise, bouncing back from the serious challenges of 2020, to grow by 4% in 2021. That’s according to a new Video Insights report from Futuresource Consulting, which shows that 2021 will reboot the market to within touching distance of pre-pandemic levels.